Kepler Analytics is in a unique and privileged position. We have our sensors in over 60 retail brands within 1,700 locations across Australia. We collect traffic and other consumer behaviour measures. Our clients provide us with their daily sales budgets, actual POS sales and often a number of other measures on which they manage their businesses.

By aggregating and anonymising our information we can provide the retail industry with benchmark measures on traffic, sales, conversion and other related KPIs focussed on understanding sales and the drivers of retail sales.

The Kepler Retail Radar newsletter is published every 6-8 weeks. We try to keep our analysis relevant and deliver helpful insights which assist in understand historical performance but also highlight where learnings can be implemented to deliver better retail results in future.

Throughout the December trading period, there have been consistent areas of interest expressed by retailers:

We have addressed these questions as follows:

In this analysis Kepler will analyse the trends and daily variations to provide retailers with a view of overall Australian retail sales performance in December 2018 and seek to identify the sales drivers which most affected this performance.

Key assumptions to be tested:

For this analysis Kepler has used data from two sources:

All stores used in this analysis are absolutely comparable as they comply with the criteria of trading across both 2017 and 2018 during the periods analysed.

This is based on the stable Kepler Panel of 324 stores across 194 shopping locations across Australia. Kepler clients have daily access to this data via a web based dashboard.

The KRI is updated weekly and provides Users with a view of changes compared to the previous week and/or weekly measures indexed on the first period a user selected.

The KRI is broken down into Australian States, different location profiles (eg. A Metro Shopping Centres, Strips, Factory Outlet Centres, etc) and 36 individual shopping centres (where there are a minimum of 5 stores with the Kepler system installed).

Christmas retail demand was late with the 3 days prior to Christmas showing an increase of 3.5% on the same 3 days last year. The addition of an extra Monday’s trading (remembering Christmas was on Tuesday this year and Monday last year) was positive. Kepler had forecasted an additional 3.2% of sales due to the ‘additional Monday’.

The expected uplift in sales $ post Boxing Day was not as pronounced as 2017 even though traffic exceeded last year. It appears from other data that retailers did not have sufficient staff or stock levels or both! Anecdotal evidence suggests that retailers were concerned about lower December sales and margin pressures and so might have tightened up on wages and supply chain movement costs.

The decrease in traffic occurred up until the 22 December and there was a period of prolonged reduced traffic after the highs associated with the Black Friday weekend.

The expected increase in traffic after Boxing Day as consumers went ‘shopping the deal’ did eventuate but retailers did not see the subsequent lift in sales (see above).

Below are the comparatives of sales and outside traffic which will provide retailers with indications of the relationship between the two measures and verses last year. 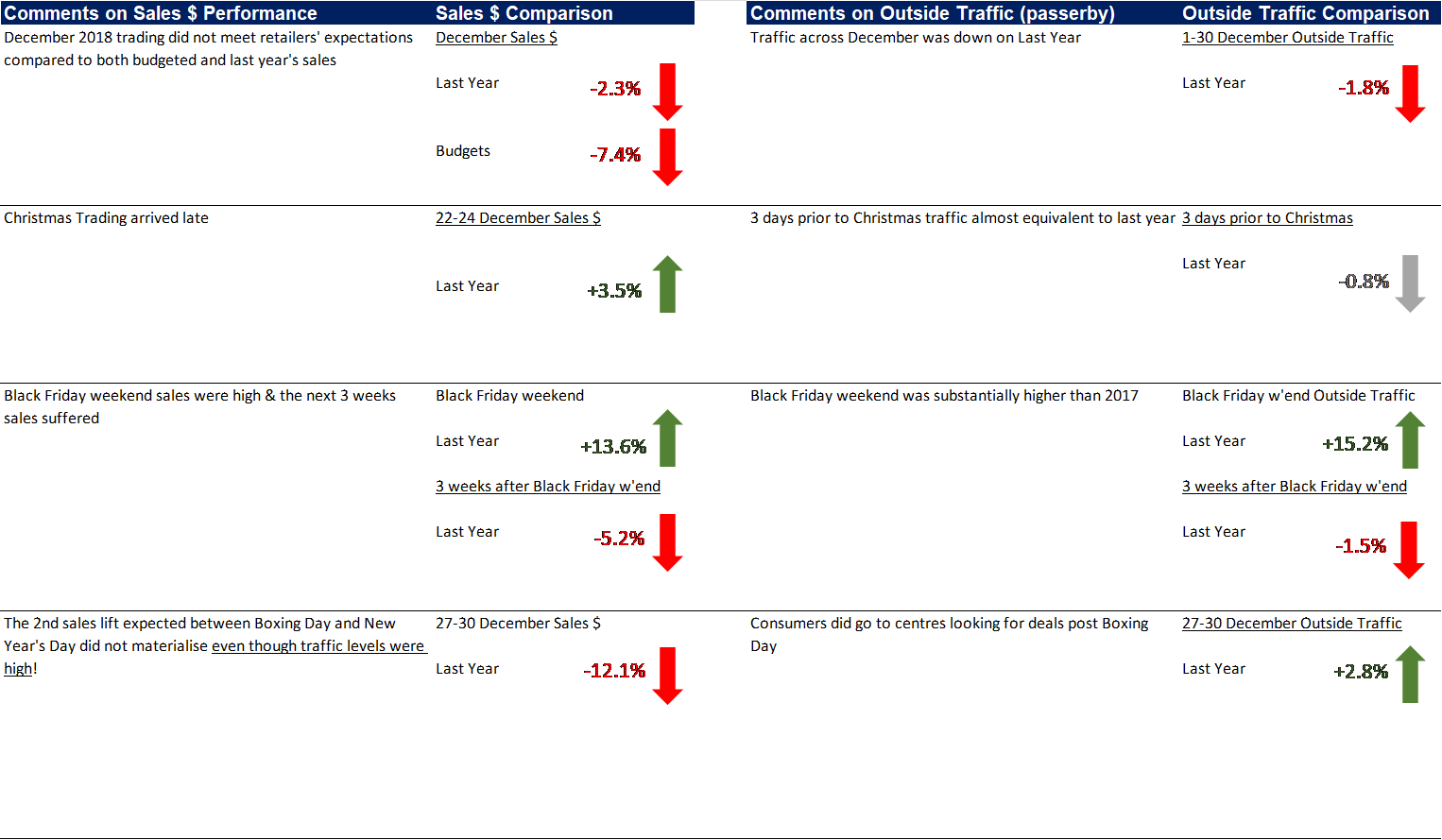 Across the 32 days including the key public holidays, Kepler retailers’ sales performance is more than -7% lower than budgets. But the pattern of trade was very different to that expected by retailers (see below).

When compared to 2017, December 2018 trading shows three observations: that Black Friday weekend had a substantial impact on comparative December trading; the Christmas rush came very late between 22-24 December; and Boxing Day trading was weaker than 2017.

The 2018 Black Friday weekend outperformed 2017 by almost 14% (1) and daily sales levels were, incredibly, similar to the level of the 27, 28 & 29 December – where the traditional post-Christmas deal shopping takes place. Ignore Black Friday and Click Frenzy 2019 at your peril!

This ‘mini Christmas’ or some were calling the ‘early Christmas’ had a marked negative effect on the next three weeks trading when compared to 2017. Retailers who were not ready for Black Friday or who did not promote effectively not only missed the upturn in sales during that weekend but were affected by the subdued trade in the period thereafter.

The Saturday, Sunday and Monday prior to Christmas 2018 (2) were comparatively very strong sales days and these days were up 3.5% verse same days last year. Sales arrived late! Boxing Day disappointed, down 10.3% compared to 2017 (3) and then the bounce post-Boxing Day was not as evident as 2017. 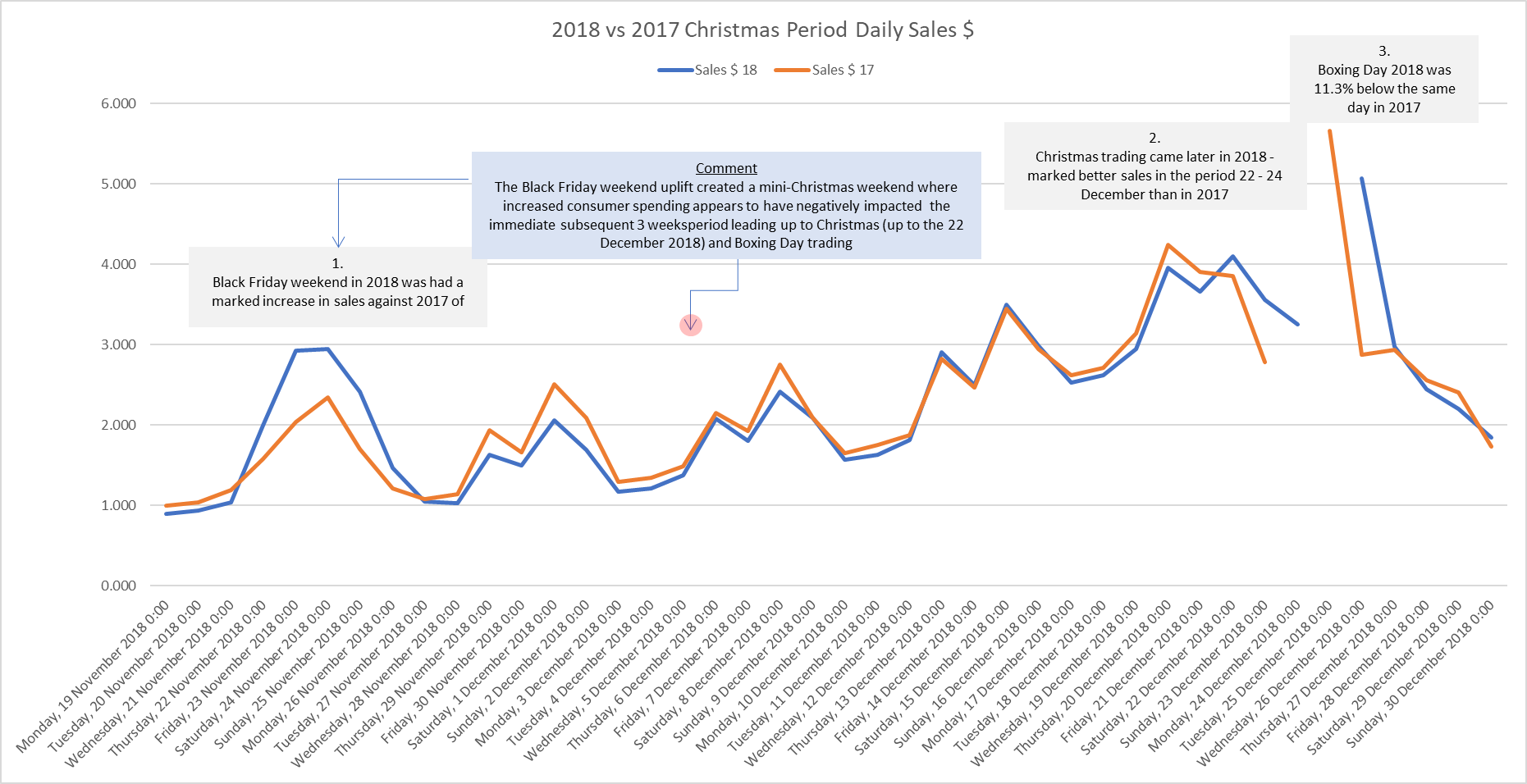 Over the remainder of this report Kepler will now endeavour to determine what the major drivers were affecting sales performance and these trading patterns.

A key driver of pre-Christmas sales in an environment of lower traffic numbers was consumers’ intent to buy (1) and retailers’ focus to optimise inside traffic opportunities into sales transactions.

Post-Christmas these conversion rates reverted back to normal levels (2) and this resulted in below average sales performance in this year’s post-Christmas period! 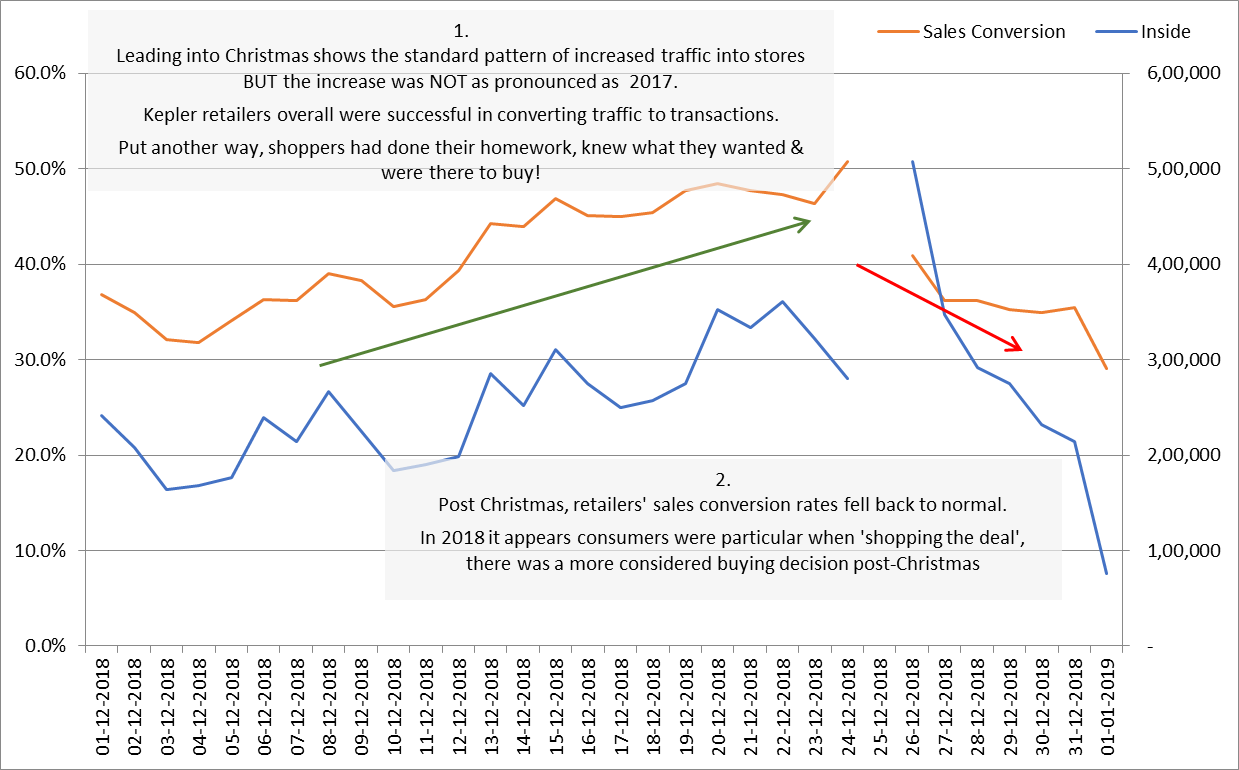 Reduced Sales Conversion post-Christmas could be viewed an indicative of inadequate staff or stock levels as Capture Rates (Shopfront Conversion) were high in this period.

In the build up to Christmas, consumer passer-by traffic (Outside) did not show increased inclination to convert to Inside Traffic (in-store).

Retailers were successful in converting Inside Traffic into sales. Sales Conversion rates grew from an average of 37% to over 50% on 24 December before Christmas (1).

This is in marked contrast to the period post-Christmas when there were fewer consumers and a lower conversion to sales rate (2). This lower sales conversion resulted in a poor sales period between Boxing Day and New Year. 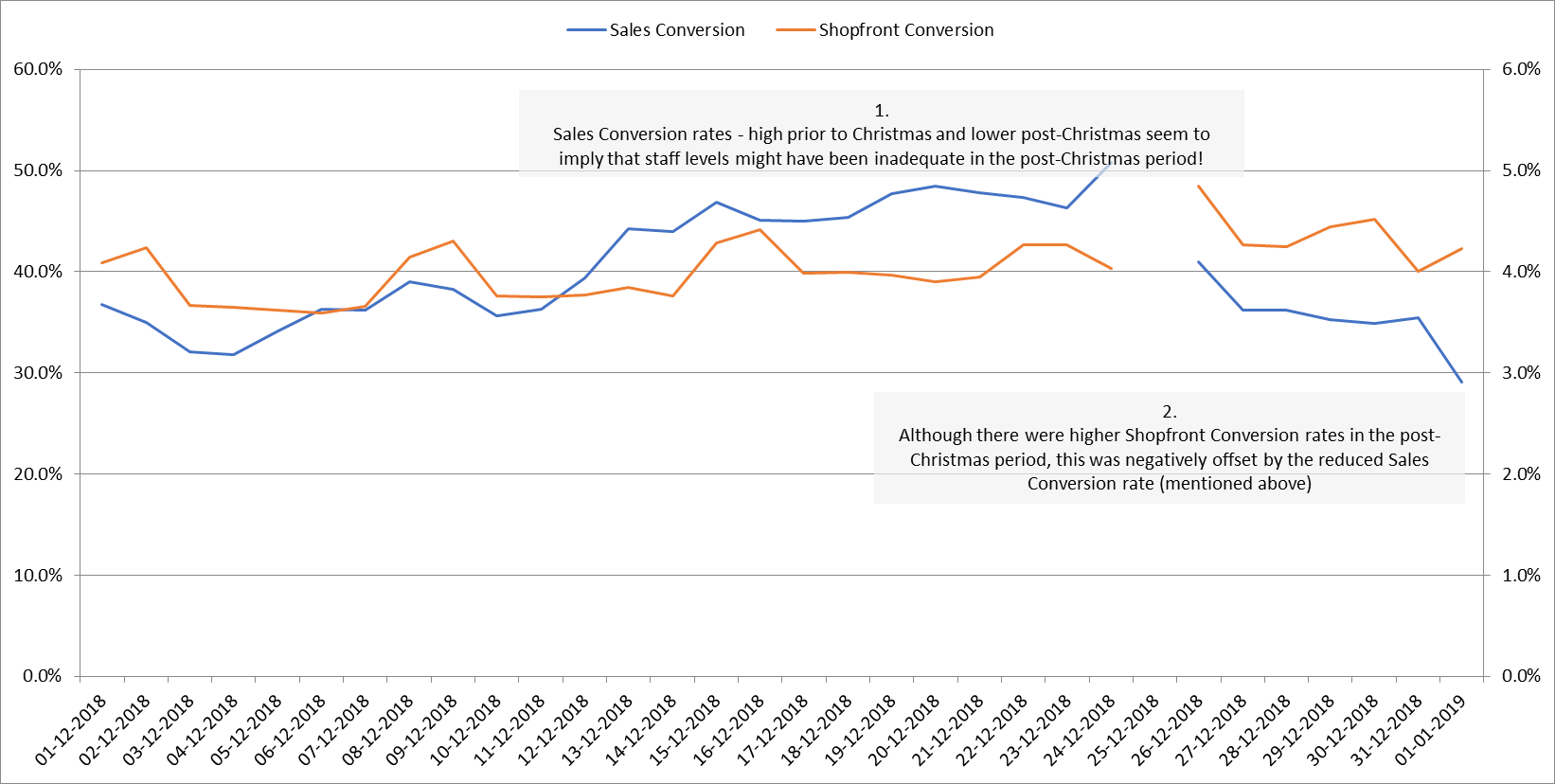 Further indications that a shortage of staff and/or stock impacted on the post-Christmas sales performance is seen in the comparable positions of Dwell Time to Sales Conversion rates in the high Conversion (1) verse low Conversion (2) periods. 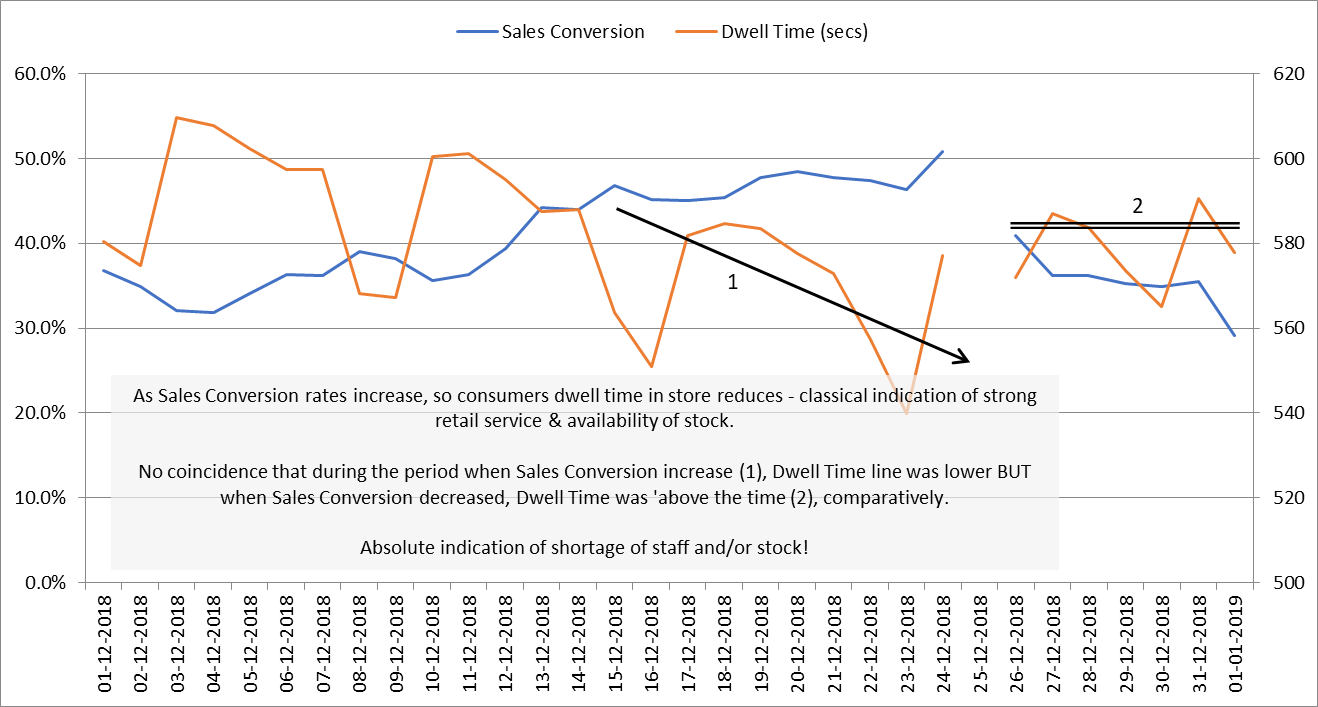 2018 traffic in the lead up to the 22 December and onwards period shows days of lower Outside Traffic (shopping centre visitors) compared to 2017. Retailers’ December 2018 sales were hit with this lower traffic and the impact of a very strong Black Friday weekend on early to mid-December trading.

During the two weeks leading up to the pre-Christmas weekend, most days resulted in lower Outside Traffic (centre traffic) than in the same period in 2017 (1). Despite higher conversion rates, this lower traffic impact on sales resulted in very subdued performance.

Only in the three days prior to Christmas Day did Outside Traffic exceed last year and this showed in better sales results for that period. 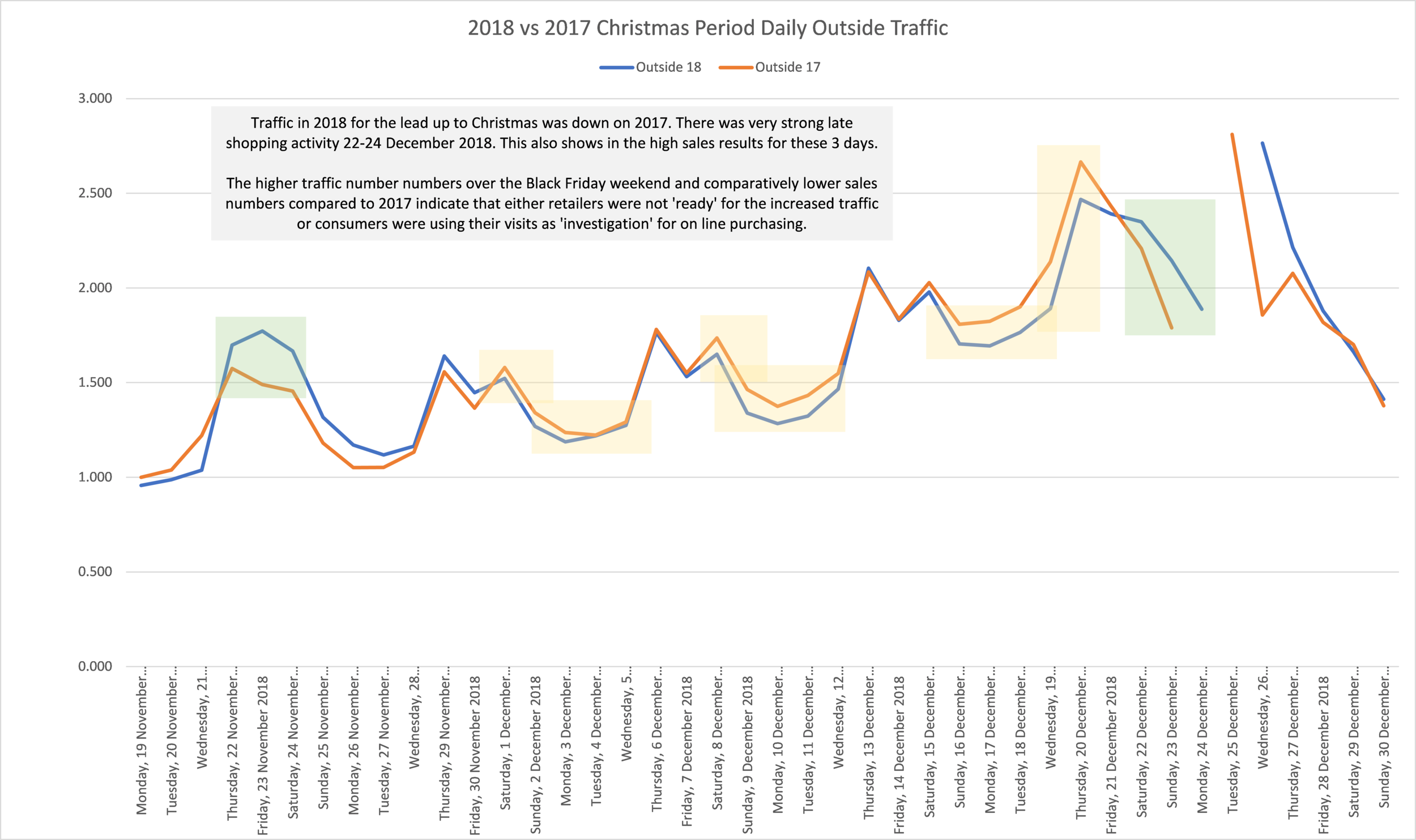 Disclaimer: The information within this document is based on information and data from Kepler Analytics and as such is our opinion. Please contact Kepler directly if you will be basing important business decisions on the data. This report is written as a general view of the Australian retail market in December 2018 and Kepler does have additional detail down to retail sector, geographic state and type of shopping centre location (large metro centres, strips, factory outlet centres, etc). Contact Kepler for further information.

PrevPreviousShoppers exhibit Boxing Day behaviour on Black Friday
NextRetail Radar – The Shadow of Christmas Past​Next
We use cookies on our website to give you the most relevant experience by remembering your preferences and repeat visits. By clicking “Accept All”, you consent to the use of ALL the cookies. However, you may visit "Cookie Settings" to provide a controlled consent.
Cookie SettingsAccept All
Manage consent

This website uses cookies to improve your experience while you navigate through the website. Out of these, the cookies that are categorized as necessary are stored on your browser as they are essential for the working of basic functionalities of the website. We also use third-party cookies that help us analyze and understand how you use this website. These cookies will be stored in your browser only with your consent. You also have the option to opt-out of these cookies. But opting out of some of these cookies may affect your browsing experience.
Necessary Always Enabled
Necessary cookies are absolutely essential for the website to function properly. These cookies ensure basic functionalities and security features of the website, anonymously.
Functional
Functional cookies help to perform certain functionalities like sharing the content of the website on social media platforms, collect feedbacks, and other third-party features.
Performance
Performance cookies are used to understand and analyze the key performance indexes of the website which helps in delivering a better user experience for the visitors.
Analytics
Analytical cookies are used to understand how visitors interact with the website. These cookies help provide information on metrics the number of visitors, bounce rate, traffic source, etc.
Advertisement
Advertisement cookies are used to provide visitors with relevant ads and marketing campaigns. These cookies track visitors across websites and collect information to provide customized ads.
Others
Other uncategorized cookies are those that are being analyzed and have not been classified into a category as yet.
SAVE & ACCEPT

Simply fill in your details below and we will be in touch to arrange your free custom assessment and comprehensive demo.